This blog was written for #FantasySmutFriday – Week #77 – The Zoom Rendezvous 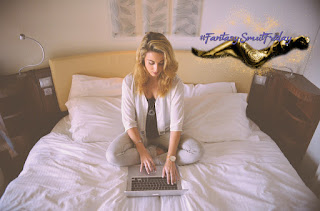 Hey, Ember, we’ve been talking for a long while now and I’ve loved getting to know you better. Wouldn’t it be great to FaceTime?

Ember stared at the screen as if Ian had called her a bitch and slapped her in the face. She couldn’t have recoiled more had she been Meg Ryan in You’ve Got Mail.

At least she and Ian had gone to high school together, reconnecting just several months ago when he messaged her in a Marvel Comic chatroom and mentioned their academic history.

They had been messaging and chatting ever since, so much she felt like she knew him as well as any of her IRL friends, maybe better in some instances. They shared a lot of the same interests, talked for hours on the weekends, Sunday quarterbacking recently watched eps of their favorite shows and had numerous dinners “together”. Friday nights were appointment TV with Spartacus, Bill Maher and Ian.

She’d had the biggest crush on Ian back in the day and maybe she’d made the teeny-tiny mistake of letting it slip one night when the wine and conversation had been flowing. She hadn’t thought he’d caught it since he hadn’t addressed her confession, but maybe that was why he wanted to FaceTime, see if the attraction was still there for her.

She nibbled her bottom lip as she stared at those blinking three dots on her Mac screen before they just stopped blinking altogether.

Instead the screen lit up with an incoming video call.

Ember tapped the FaceTime icon to accept and just like that Ian’s chiseled features appeared on her screen, mocha-brown and finer than she remembered.

“Beautiful and sexy as ever.” He smiled.

“You weren’t the only one with a crush.”

“Yet you never said anything.”

“You didn’t either…until the other night.”

They shared a quiet laugh before Ian got serious. “I didn’t want to embarrass you. I remember how shy you were in school.”

“No, just antisocial.” He grinned. “You can’t tell me you didn’t cringe when I first suggested FaceTime.”

He knew her too well.

“I’m actually surprised you accepted my invite to chat.”

“How could I ignore an invitation from Cap?”

Before she could say she was just kidding, Ian moved back from the screen and she watched as he peeled off his Henley, exposing washboard abs and then took off his sweatpants to reveal a set of long, well-muscled legs. He turned his back to the camera to grace her screen with the most delectable ass encased in dark-red Calvin Klein boxer briefs.

She wanted to squeeze and bite each cheek but was dragged from her wicked daydreams and chuckled when Ian wiggled his ass from side to side before coming back to face the screen.

Before she could think twice, she reached for the bottom of her t-shirt, pulled it up over her head to reveal a purple lacey bra. She tossed the top aside and lifted her chin.

Ian arched a brow and smirked.

Butterflies of excitement fluttered in Ember’s stomach. She’d never had phone sex before much less Skype or FaceTime. But she knew that’s where this was heading. Her swollen clit and soaked panties told her so.

Had it been so long that a little naked male flesh and a crooked grin revved her engines so easily? Evidently so. And it was more than a little flesh. Way more.

Ember peeked at Ian’s considerable package as he sat cross-legged in the middle of his large, neatly-made bed. She imagined herself sitting beside him, rubbing his cock as she whispered dirty nothings in his ear.

She licked her lips, stood from her bed and took off her yoga pants, giving Ian a little floor show in her purple lacey panties.

“Matching underwear. Nice. Were you expecting me?”

“Don’t flatter yourself. I like to wear nice undies no matter the occasion.” If she waited for “special occasions”, she’d never have an excuse to put on her Victoria’s Secret.

“Touch yourself,” he whispered.

Heat surged straight to her pussy at his deep butter-melting voice. She slid her hand between her legs without question, like she was a genie and he was her master.

Ember caressed her cunt and teased her clit with her thumb as she closed her eyes, arched her neck and moaned.

“Mmmm, you know what would be hotter?”

She lowered her head to stare at him. “If you joined me.”

“I believe I will.” Ian thrust his hand inside the fly of his boxer briefs and withdrew his long thick cock.

Ember licked her lips at the pearl of pre-cum glistening in the slit, imagined the musky smell of him, the thought of taking his hard dick into her mouth making her salivate. “You look good enough to eat.”

He slowly stroked his cock at her words, using his pre-ejaculate to make the glide smoother.

Ember watched him for a while before she realized she had some catching up to do. She slid her hand beneath her panties and a finger inside her weeping pussy. From lots of practice, she found her G-spot fast, rhythmically massaged herself as she watched Ian jerk off in front of her.

Between listening to Ian’s low male groans and watching his beautifully muscled body in la petite mort, Ember came in no time, her moans joining Ian’s as an orgasm stormed through her.

Panting, she watched as Ian recovered, grabbed a wet wipe from the box on his bedside table and cleaned his hands and cock. She made a show of licking her fingers as she stared at him.

“So, are you ready for some Spartacus?”

“I’m for wine and the embrace of a questioning woman.”

She chuckled. “I see what you did there.” 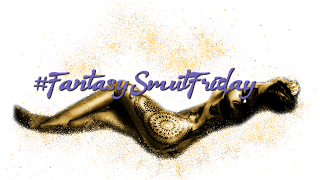 A delicious quickie that will leave your senses with physiological euphoric effects.